Octodad: Dadliest Catch is available now on the Xbox One and is priced at £11.99.

The minute I downloaded this my kids were in peels of laughter. 'An octopus that's a DAD?' shouted my lad with tears rolling down his cheeks. Since then he's had EVERYONE play it. I mean it, neighbours, grandparents, every person who has graced our living room has had a go at controlling Octodad.

The joy it has brought him is priceless and in my opinion if you're a parent that's all the review you need. And for those of us that have to battle our little ones in order to actually get to play a game, Octodad is a god-send. I mean yeah he's played it, but he LOVES watching it! 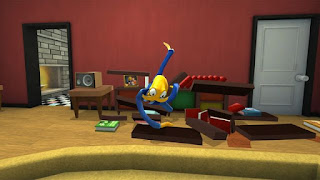 Octodad is a game that you've probably heard of, seeing at it was released on Steam a few years back. There are a few PC games being brought over onto console and I have to say that this is definitely one of the greats. Obviously it's not supposed to be easy to control, you're a goddam octopus in a suit, but for what it's worth the mapping onto the controller is really intuitive. Graphically the game is great, all cartoon-y and super fun. The voice acting is good, and I especially love the kids., even though I REALLY don't wanna know how they came to be....

The game is just chaos encapsulated, which is probably why my lad likes it so much. As you can imagine it's not easy to live life as an octopus pretending to be a man. He is the cause of MUCH destruction, even more if you let your kids have at it. Take him up the aisle, into the grocery store and even to the Aquarium in your quest to blend in and be good dad.

Honestly guys unless you're a complete fun-sponge you're gonna love this game. Just go get it.

Email ThisBlogThis!Share to TwitterShare to FacebookShare to Pinterest
Labels: Octodad, Review, Xbox One