The Swindle (Xbox One) - Review

The Swindle is available now on the Xbox One and is priced at £11.99.

I could wrap this review up in two words; Cash-based Spelunky. Okay, okay that was three, but there you go job done. If you liked Spelunky but felt it was missing cash then The Swindle is for you.

What? You come here to read more than one line reviews? Alright, I'll go on then.

Actually I do The Swindle a disservice in the above statement. Whilst it is undoubtedly like Spelunky, The Swindle succeeds where Spelunky just didn't, and that is that The Swindle is really, really fun. Not that Spelunky wasn't, it was just more irritating than fun for the most part. That and the fact that The Swindle stands up as a single player game much better than Spelunky did (I NEEDED my friends to play it with me, otherwise I never got out of the caves).

The Swindle is a 2D procedurally generated burglary simulator set in an alternative Victorian era, because why the hell not(?!) you play as an infinite supply of burglars attempting to stop Scotland Yard deploying 'The Devil's Basilisk' which actually sounds a lot meaner than it is, seeing as it's basically CCTV (is this world that alternative?) that will stop all crime in the city. Being a career criminal, obviously you have a pretty good reason not to be down with that. 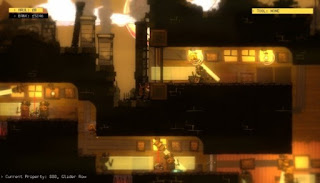 So you're given 100 days to stop that from happening. This simple addition of a time limit to a game of this type is what really makes The Swindle amazing. At first I hated it and felt so pressured, every time I killed one of my crims I was so annoyed that I'd wasted the time. But it is this time constraint that keeps you going. Having a set amount of levels that you can use to complete your mission is genius.

The Swindle is the PERFECT pick-up-and-play title. When you first get it you'll easily sink an hour at a time into it, maybe even more. But the longer you have the game, or more realistically the more times you restart your progress because you've learnt something new that might help, the LESS time you'll actually spend on The Swindle in any one sitting. Which is a great thing (honestly!). I found that the longer I stayed on it the sloppier I became, I would rush through and end up dying much more than I needed to because I was making silly mistakes in my haste. Go on for just one or two levels at a time and you become the worlds greatest criminal, at least in your own head. I took my time to plan the best route through the building, planned out my attacks and ended up earning a lot more.

The Swindle is well worth the £11.99 price tag in my opinion, something I rarely seem to say anymore. It's a really fun game that you will keep just going back to for 'one more' heist. I have had a few problems with jumping, namely it not working and me diving head first into a pit of spikes and that gets REALLY annoying, especially when one of the achievements is for completing the game with your original criminal. But overall I'd definitely say The Swindle is a game worth having.

Email ThisBlogThis!Share to TwitterShare to FacebookShare to Pinterest
Labels: Review, Spelunky, The Swindle, Xbox One