Spectra is available now on the Xbox One and is priced at £5.99.

Spectra had me intrigued from the moment I first saw it. I'm a sucker for simple music games and in my head Spectra was going to be a game where you moved with the music. A game which had your little ship on a track, that was interchangeable with either a flick of the stick or a tap of the trigger.

Unfortunately it isn't any of those things. Whilst the music is fantastic it feels like just an addition to the level. The obstructions you will encounter along the way don't happen in time to the music as I thought they might and crashing into them has no effect on the music whatsoever, which I found pretty disappointing. 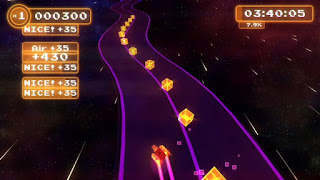 The ship isn't on tracks either, you can move it as little or as much as you would like. Which does bring an extra challenge as you now have to battle to simply stay on the track, but because you have no control over the speed at which your ship travels it doesn't fit very well. It feels just like an infinite run kinda game, but it lacks the precise movement the best games in that category have, meaning that it falls short of being a big hit.

None of the tracks on which you race seem to be any different from each other either. If you play a few levels on this game in one sitting boredom really begins to set in, it's pretty tedious. Add to that that you can't just simply restart through the pause menu if you've made a mistake and this game really starts to get annoying.

Spectra is cheap and as I said the music is so brilliant, but unfortunately having no real change in track design makes the music pretty arbitrary. There's no real sense of progression with the game, yes you progress through levels but you only end up on a very slightly different level. I'm struggling to think of anyone to recommend this too, maybe fans of this style of music? But even then I'd say you can afford to wait for a sale, and see whether the soundtrack is available elsewhere. The music is definitely the best thing to takeaway from this mediocre game.

Email ThisBlogThis!Share to TwitterShare to FacebookShare to Pinterest
Labels: Review, Spectra, Xbox One