Quantum Rush: Champions is available now (US Marketplace only) and is priced at $14.99.

Yes for my readers outside of the US you will have to change your Xbox locale to be able to download this Wipeout-esque racer. So is it worth it?

Well in a word, no. Unfortunately Quantum Rush: Champions feels very much like a budget version of Wipeout that has been rushed out to cash-in on the gamers that are hungry for them to make the jump to the current gen of consoles. I feel like there were plenty of good ideas that went into making Quantum Rush: Champions. There are some really well designed tracks and a plethora of game modes to play, but unfortunately it seems that the developers definitely leant more towards quantity than quality. Whilst it is nice to have such a large amount of choice, it would have been infinitely better to have, say, three game modes done well rather than loads that are just alright. 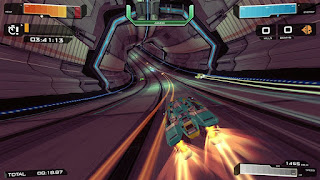 The graphics leave a lot to be desired too, Quantum Rush: Champions will definitely not be grabbing any awards for its graphical beauty. It's blocky and does feel very much like a last gen offering, made worse by the issues I was plagued with. There was a bit of screen tear, but to be honest that could be ignored, the jittery frame-rate however could not, and means that this game really suffers from feeling like a budget release. When it is priced at $14.99, which I'm guessing would be £11.99 in our UK Marketplace, I just don't feel like it's cheap enough for the game we are given.

I could ignore the graphical problems though if this game was really fun to play, but unfortunately it even falls short on that front. Yeah I suppose if you picked it up and did one track at a time then maybe you'd find it fun, but for me it just wasn't, and definitely isn't a game I could while away an hour or so on. It controls quite well and feels responsive which is a huge plus, but unfortunately everything else just takes too much away from the experience for it to ever be a massive hit.

It's hard for me to recommend this one guys, as I know there are many people waiting for a Wipeout game to come out this gen. But I'd say keep holding out hope for that instead of spending your hard earned money on this one. It feels cheap, and really it isn't, there are many games on the Marketplace at this price point that are infinitely more fun. Save your money.

2/10 SKIP IT!
A code was provided for the purpose of this review.